Should I purchase the Drake Cutlass Black or Misc Freelancer?

Perhaps you're deciding between the Cutlass Black and the Freelancer game package or maybe you’re looking to upgrade your starting ship. Whatever your interests, this article provides a comprehensive look at the pros and cons of both the Cutlass Black from Drake Interplanetary and the MISC Freelancer.

Both the MISC Freelancer and the Drake Cutlass Black offer great starting options for players in small teams or who wish to also operate solo in larger ships than the single player options. Chances are, if you’re comparing between these two ships then you already know the role you plan on starting and are trying to decide whether the Cutlass or Freelancer is better for you.

Both the Cutlass and the Freelancer come in various standard configurations known as variants. Here are some of their roles:

Also known as the base Freelancer, this version is best suited for cargo running. This ship should easily be soloable. Bring one friend along for a less lonely cargo journey!

Described as, “Sacrificing 25% cargo capacity of the standard Freelancer for an enhanced jump drive, a more advanced scanner, and an expanded fuel tank may seem like a bad call to some, but those who value discovery over profit will find it to be their ship of choice.” The Freelancer DUR is the goto exploration ship for the $150 price range. This ship is not for sale with a starter package so interested players will probably need to cross chassis upgrade their game package ship to this ship.

The Freelancer MAX sacrifices combat ability for even more cargo. A pure cargo runner aimed at flying in safe space.

This 3 max crew variant of the Freelancer is a missile boat.

Heavily armed and cheap to operate, the Cutlass Black represents the ideal ship for starting pirates who want to deal damage while still being able to haul away their cargo.

However, the equipment configuration options mean this ship can probably be used for many roles including, exploration, trading, combat, rescue and more. The Cutlass Black is our favourite for this category due to its versatility.

The ambulance of the verse, this ship comes with well-equipped medical facilities as well as an Autodoc. “This starbound ambulance features the Nav-E7 Echo Transponder, a long range scanner, and a Secure Plus Docking Collar, making it ideal for search and rescue. This model also features a unique Red Crossbones skin.” - Source

As of Alpha 3.8.1 the Drake Cutlass Red is flight ready and includes two functioning medical beds. These medical beds can not only be used to heal players but players can also set them as their ICU respawn location. Should a player die withing range (a few million KM) of the Cutlass Red, they will respawn on the ship. This marks the very beginnings of the planned medical gameplay.

The Cutlass Blue features bigger engines meaning it will be better at chasing down foes. Additionally, it comes with Durasteel holding cells to transport prisoners.

Cutlass Vs Freelancer - Best By Roles

Professions in Star Citizen will have different ships that are better suited for the roles. The Freelancer and Cutlass both have some overlap in roles and we will recommend ships in this article based on some of the roles players will be interested in.

Expect the Cutlass Black to be better in combat but the Freelancer to haul more goods.

The Freelancer MAX is the true winner of when it comes to non-combat cargo and trading but the Cutlass Black is the best defended. For safe space trading, the Freelancer Max is the best option. However, in safe space the Hull series (also by MISC) is probably a more profitable ship and should strongly be considered.

For exploration enthusiasts the Freelancer DUR is the go to small crew (2 to 4) ship for Exploration.

The Cutlass Black has a reputation as a popular pirate ship and therefore we think the Cutlass Black will ultimately hold the combat edge vs Freelancer models. However, it is worth pointing out that the Freelancer MIS is capable of carrying many missiles and is sure to pack a powerful, albeit expensive, punch in combat.

Those looking for a fighter that can scare Constellation sized ships into submission should look no further than the Cutlass Black. The Cutlass black also holds enough cargo so that you can make it home with your “newly acquired” goods.

The Cutlass Blue is labelled as Police ship. It even comes with cells for which to put away captives, criminal or otherwise.

For small bounty hunting multi crew teams the Cutlass Blue might offer a similar experience to the bounty hunter ship seen at the start of the Chronicles of Riddick film.

The Cutlass Black comes equipped with a tractor beam while none of the other Cutlass variants or Freelancers have this option. This makes the Cutlass Black be able to perform basic salvage operations. 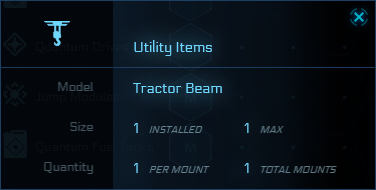 From CIG: “The Cutlass Red converts the standard cargo hold into a well-equipped medical facility including an Autodoc. This starbound ambulance features the Nav-E7 Echo Transponder, a long range scanner, and a Secure Plus Docking Collar, making it ideal for search and rescue.”

Starting Hangars and why you should care

Ships come with hangars and there are currently four hangars available (3 of which are purchasable as upgrades).

The starting hangars in order of value are:

This information is extremely speculative until hangars reappear usable and purchasable in the PU.

The Freelancer comes listed as including a "Digital Engineering Manual" while the Cutlass Black does not have this listed.

*Prices quoted are in USD (without VAT). RSI ship prices and taxes vary by location so please check. The point of presenting the price is to show the relative difference in price between the two ship strictly for comparison purposes.

While both ships can have more players inside the ship and doing things than the max crew number, the Max Crew represents how many crew can actually be involved with the ship and have actual posts to sit at that have controls.

The Cutlass Black has 3 seats that control the ship. The pilot seat, copilot seat and the manned turret.

The Freelancer series, on the other hand, offer 4 seats from which players can control stations. This gives the Freelancer a greater value due to the various things tasks players will be able to carry out from the stations. For example, a Freelancer crew could be seated as follows: 1 pilot, 2 manned turrets controlled from the 2 rear cockpit seats and one copilot controlling shield, weapon and power distribution. We estimate, therefore, that a fully crewed Freelancer could be a very effective ship.

Freelancer or Cutlass Which Should I Buy?

We recommend the Cutlass Black for the following reasons:

Note: Although the Cutlass is more versatile and has a lot of extras listed, the MISC Freelancer is a tougher ship capable of carrying out advanced roles. For those looking for a specific role the Freelancer could be more efficient.

Important for New Players -> Make sure to use the Referral Code when buying the game. It gives an important additional amount of credits (+5000 UEC) when starting the game. Given the Cutlass and Freelancer are more expensive starting ships it is extremely important to get the additional credits.