Disclaimer: The information in this article encompasses some of what has been discussed / considered so far by CIG. This information is subject to change without notice as the game continues development. Last updated 7th December 2018.

Please note that the content of this post can be seen as controversial. The information compiled is not representative of any official information and is purely provided as speculative. Official CIG posts on insurance can be found in our sources section.

How does insurance work in Star Citizen?

Insurance fees will make up a relatively small amount of the total fees that you will have to pay in game that include docking fees, trade tariffs, fuel, hired crew, among others. This means that players should not be overly concerned about insurance costs (above other gameplay costs in Star Citizen). It's worth noting that more expensive ships will probably have higher insurance premiums, so players should expect the costs of insurance (like all costs) to scale with the ship value.

LIfetime insurance “... protects the investment you made in the game in perpetuity.” - From Insurance FAQ & Update

Ships with lifetime insurance (LTI) will not have to pay the in game fees to maintain their ship’s insurance policy. Due to the fact that ship insurances range from a few months to years the frequency of payments will be low and thus almost a negligible expense in the game.

Insurance can be purchased for ship, modules, cargo, upgrades and modifications. Ships and ship hulls will be replaced when an insurance claim is made but any cargo and and modifications will be subsidized. Additional policies for upgrades and cargo will be rated based on risk levels. Different parts of the universe will have different risk ratings and traveling to dangerous places will cost a higher insurance premium for insuring valuables.

Insurance policies are attached to ship hull id and cannot be transferred from one ship to another. Ships traded from player to player carry the insurance with the hull id of the ship and will be transferable.
It is also important to note that cross chassis upgrading a ship will retain any lifetime insurance attached to the hull. For example, if you use the cross chassis upgrade (CCU) from Cutlass Black with LTI to a Constellation Andromeda, the Constellation Andromeda will have LTI as the hull ID of the ship remains the same during a cross chassis upgrade. Note: It has been mentioned that the ability to upgrade the chassis from the RSI website could be removed before the game launches.

How long will my Ship insurance last in Star Citizen?

For example, the rate at which time ticks while you’re playing may or may not be equal to real hours and days (Original Source from 2014). Please note that this will be defined by CIG in the coming months and years until release and is subject to change. The in game timer will move in real world time so the insurance will also tick in real time.

If your ship’s insurance expires and the ship is destroyed in Star Citizen (not Arena Commander) then you will have options to renew your ship's insurance before using your ship. However, it is still unknown whether you will be able to still lose your ship should you risk it with an expired insurance premium.

Can I lose my ship permanently if insurance expires?

While there has been much speculation it has been proposed that players would not be able to permanently lose ships purchased with cash. However, this has since possibly changed again or the position was not endorsed. There is evidence showing that previous comments from the company about purchased ships being permanent is being edited, hinting that this is not at all confirmed and possibly not even the case.

Just from a purely speculative perspective, the value of ships would be higher if they could be permanently lost. This would mean players would have to be a lot more careful about renewing their ship premiums. It would also greatly reduce the ship accumulation and help maintain rarity (or increase). Careless players could lose their ships and become space pedestrians. This would also mean LTI would or could be a lot more valuable. Players should carefully consider the options when pledging.

How much will renewing the ship insurance cost?

The cost of renewing your hull insurance in Star Citizen has been stated by RSI to be comparable to other costs such as docking fees, refuelling, maintenance etc… This means that it will not be free to renew insurance policies but it will also not be a disproportionate cost compared to other expenses in Star Citizen. Expect more expensive ships to be proportionally more expensive to insure than cheaper ships.

What is the real value of LTI for ships in Star Citizen?

After the game launches it will no longer be possible to upgrade ships from one to another. Players will have to sell one ship to buy another if they cannot afford to buy a ship outright. This means that upon launch the LTI ships will be fixed and will become tradable assets in the universe. The number of Cutlass Blacks will LTI, for example, will be set when CCUs stop being available.

The limited availability of LTI means that eventually within the Star Citizen universe the market will set the price of LTI ships.

Despite a lot of debate and what has been officially stated regarding LTI, the truth is the market itself will dictate what players will perceive the true value of LTI to be once the game has a functional economy.

Some players have stated that since they are paying real money to buy virtual ships, it makes sense that they buy all the ships with LTI if the cost is approximately the same.

Further reading on Reddit: LTI and it's perceived value to you?

How do I get Lifetime Insurance on my ships?

If the ships a player has do not currently have LTI, then it is not possible to take out lifetime insurance on those ships. All options involve replacing the original ship with one that has LTI.
LTI is currently available for concept sales where players essentially back a new ship once the concept is announced and then some time in the future when the ship has been built they will be able to play it.

By purchasing a low price LTI concept ship, players are able to CCU the cheap LTI ship to another ship of their choice that is available for purchase on the RSI website. Cheap ships like the Drake Dragonfly or Argo that are used to upgrade to larger ships for the LTI are commonly called “tokens”.

By using tokens you can buy a larger ship with LTI after the concept sale by using the following method:

Additionally, you can only upgrade the LTI token to another ship if the CCU for the upgrade you want is available and there are no other restrictions. For example, during the Hornet 20% discount sale it was not possible to apply the upgrade from a Dragonfly or Argo with LTI to the Super Hornet. 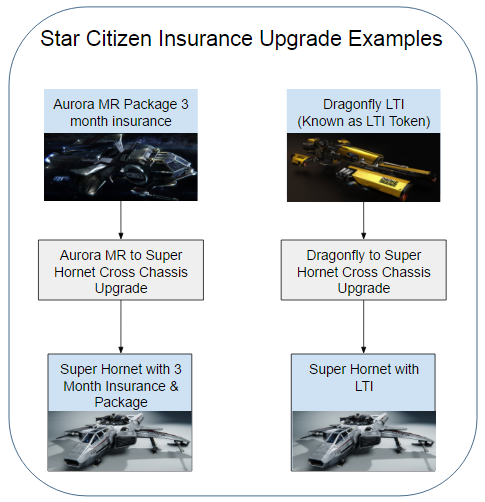 Can I get LTI for my Star Citizen Game Package Ship?

How to convert a Cutlass Package into a LTI package

If you have the Cutlass Black Starter package with, for example, 6 months insurance and you would like to have a Cutlass Black LTI package you are able to do this currently using the Cross Chassis Upgrade (Ship Upgrade or CCU) system. For this you will need an LTI Token (cheap LTI ship, example the Drake Dragonfly).

Step 1. Make sure you can afford the cost of melting the package, using the LTI Token ship to upgrade to the Cutlass Black and have enough money left over to be able to purchase the Starter Package Aurora MR or Mustang Alpha (SC or both SC & S42 as you prefer**).

Step 3. Purchase the cheapest Starter Package with the games you want (SC or SC & S42**).

Step 4. Using the LTI Token, use the Ship Upgrade system on the RSI website to upgrade the LTI Token to the Cutlass Black.

**Squadron 42 stopped being offered as a standard combo pack. While combo packs are still sometimes available, generally you will need to purchase S42 as an add-on during the checkout process.

If you really want LTI to permanently insure your investment then the extra spend is probably justified. This is because the game package will be available to you for as long as the game is available to play and the LTI ship means you will always have a ship to pilot in Star Citizen. 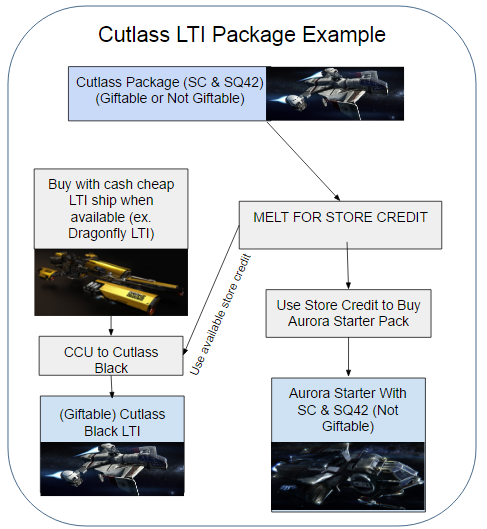 How To Buy An LTI Super Hornet

For those who want to purchase an LTI Super Hornet even though the concept sale is long over, it is possible to convert a cheaper concept sale ship into an LTI Super Hornet through the Cross Chassis Upgrade system. The CCU can become available if the Super Hornet is for sale. Please note earlier in this article we stipulate there the intention seems to be that CCU's will be phased out as the game approaches commercial release.

The giftability of any ship depends on how it was originally purchased. If RSI Credits are used to purchase the original ship or game package it is not giftable. Only ships and packages bought with cash are giftable.

If you purchased your original LTI ship with RSI Credits and would like to make it giftable you can follow these steps:

You cannot use Store Credits (or Gift Cards) to get LTI on a ship. LTI is specifically attributed for backing a concept ship which means directly helping to fund its development.

While CIG allow players to melt a ship they are not happy with and use the credit towards a different ship, they do not allow LTI attribution to players who have thus abandoned their original concept pledge. While the reasons for this are subject to much speculation it is likely that the reason for this is that many players choose to change ships depending on which ship is new or playable each patch. This skews the original concept backing figures and also creates administrative work. These costs are therefore mitigated by only allowing LTI for new funds. An unfortunate side effect of this is that since Gift Cards can be created through melting they are also affected by this and do not count towards new LTI concept sales.

Players should note that they will not be able to get LTI by using Store Credits and gift cards). If you use store credit to purchase a concept ship (Such as the Anvil Arrow) you will probably receive the 6 month insurance version.

Other Insurance and Lifetime Insurance discussion