“Make versatility a reality with the 2948 Vulcan from Aegis Dynamics. A support ship redefining the three R’s to mean -- Refuel. Repair. Rearm.

Refuel stranded ships or top off those toeing the line. Industrious design from famed Aegis engineer Parnell Rowan means the Vulcan is ready to work for you. Whether on a refueling run or hauling supplies in the rear cargo hold, the word that might best embody the Vulcan is resourceful.

Repair damaged ships without risking a spacewalk. The Vulcan comes standard with BARD drones and support stations to oversee repairs. Built in drone launchers put their deployment and repair right at your fingertips. Another tool on the Vulcan’s versatile utility belt.

Rearm others when needed most. Balancing fire power and protection, the Vulcan holds its own in a scrap. Countless UEE Navy pilots can attest to its capabilities, as the ship has been a battlefield staple for centuries.” 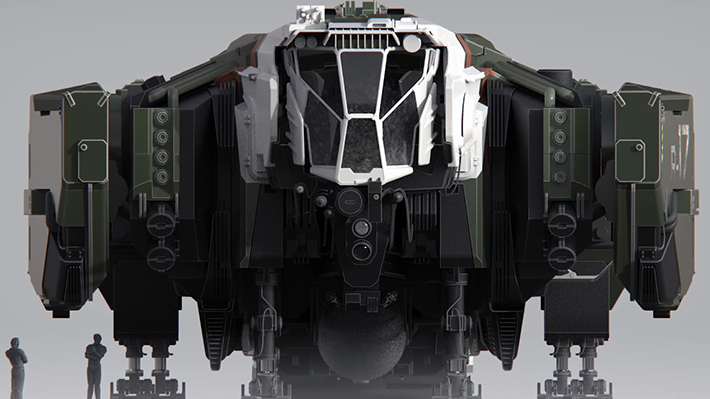 Aegis Vulcan Around the Verse

Who needs the Aegis Vulcan?

The Vulcan is a medium sized, heavily armored industrial ship ideal for the following operations for small crews (approx 3 crew):

The ship can also be operated by a single player. Running this ship with 2 crew is recommended with 3 crew being optimal.

Learn more about the Repair, Refuel and Rearm roles on our Star Citizen Professions page.

The Vulcan offers multirole capabilities and features the following:

The Vulcan is a profession starting ship designed to give players a feel for the repairing, refueling and rearming careers. Due to its relatively large size for a medium ship it is able to perform other job roles such as cargo transport, salvage and rescue to a smaller degree than its primary roles. This makes the Vulcan a very versatile ship, an almost indispensable addition to any fleet.

Aegis is known for military ships and the Vulcan is ideally suited to support fleets in Squadron 42 and we speculate that partly explains its timely arrival to the Star Citizen universe. The Vulcan will be a tough ship labeled by some as a “baby Reclaimer” due to its resemblance to its bigger brother and dedicated salvage vessel.

We speculate the Vulcan will be able to carry out these roles to some degree:

How Much Cargo Can The Vulcan Transport?

The Aegis Vulcan has a cargo capacity of 12 SCU. Since this information is subject to change, please check for the most up to date information on the official Vulcan page.

The Vulcan’s cargo hold is located at the rear of the ship. 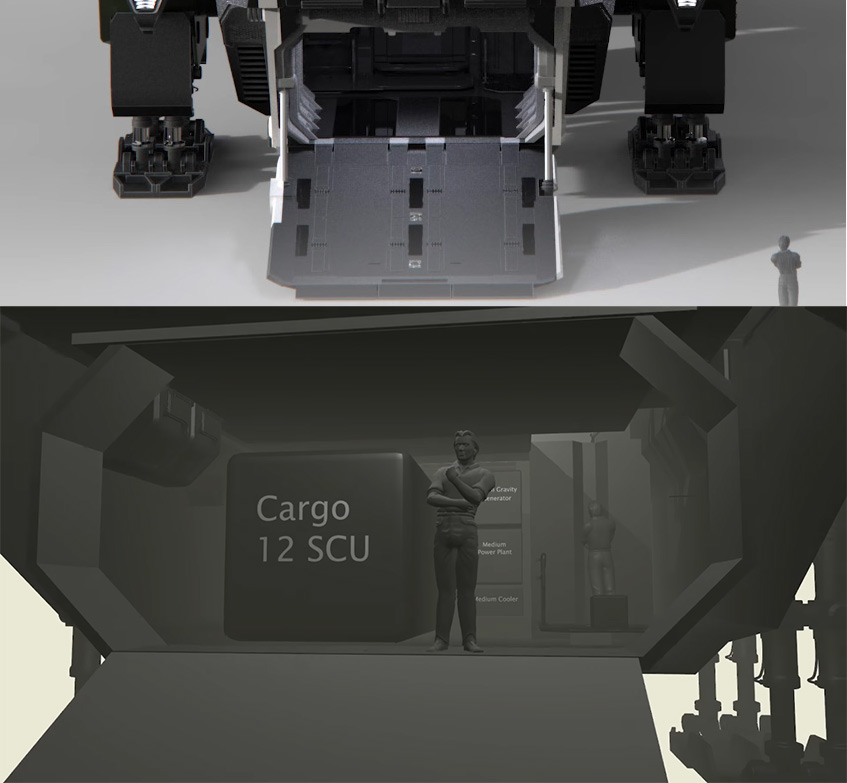 Ships With Less Cargo Space Include:

Ships With More Cargo Space Include:

Vulcan repair drones are capable of repairing, refueling or rearming. This means that a drone that is prepared for repairing is not able to also refuel or rearm unless it is stored and configured for one of the other tasks and then redeployed.

It is planned to be possible for the Vulcan to repair 4 ships at once using 1 drone per ship and each station cycling between it’s two drones. Source

For example, a Vulcan could deploy 4 drones to repair and refuel a Cutlass and an Aurora MR. Each station could dispatch 1 repair drone and 1 refuel drone to each ship one at a time. When the first drone arrives the task is started and the drone operator switches to the second drone and then flies it to the ship. Once the drones finish the first operation the operators switch back and then issue the 2nd drones new tasks. The first drones are then piloted back to the Vulcan once the task on drone 2 has been issued.

This allows all 4 drones to be potentially deployed and operating (depending on duration of each task). However, each action from a drone will only restore part of the issue. It will most certainly always be necessary to deploy multiple drones for all but the smallest tasks.

Since each drone is only capable of performing one role and there are a total of 4 drones, it is possible to configure the drones very differently depending on the “speed” you want to carry out a task. For example, sending 4 drones for refuelling to a ship sequentially will speedily give a ship enough fuel to get on it’s way. Similarly, if a ship is only low on ammo, 4 rearming drones could be dispatched sequentially to quickly and fully rearm the ship. Please note the control station only allows for active use of 1 drone per station. However, since drones can be issued tasks, such as refueling, it is possible to have 4 drones performing operations simultaneously.

The Vulcan is a heavily armored ship designed to perform small and medium battlefield repair and resupply operations. Ship combat is an integral part of Star Citizen and what better way to profit from combat than to provide services near or even in the battle zone!

The Vulcan’s armor will provide safety but damage to the exposed fuel tanks on the bottom of the ship should be avoided.

Will the Vulcan be able to repair itself?

Yes. The Vulcan can repair many things including itself and other drones, vehicles etc… This also depends on the extent of the damage but generally yes.

Will the Vulcan drones be able to repair each other?

Yes. The drone can repair other drones, hardpoints, vehicles, ships and more.

How does the Vulcan repair hulls?

The repair drones use mixtures of alloys that will carry out small ship hull repairs. The mix will be preloaded into the drone before deploying the drone.

Will the Vulcan need to carry different ammo types or will there be bespoke ammo to be carried around for resupply?

Initially the ammo types will be generic to simplify the introduction of this gameplay mechanic. The final word on this will be determined as the game progresses.

How good is the Aegis Vulcan at salvage?

The Vulcan will be able to perform basic salvage operations due to repair role having some overlaps with salvage gameplay mechanics.

Additionally, while performing repairs, it will be frequent for damaged ships to want to sell their damaged parts at a discount - especially if the ship in need has no storage space to take the damaged parts back with them. Situations like these will give the Vulcan a better operating margin for shrewd planners seeking bigger profits.

The Vulcan will also be able to strip salvage which will replenish alloy supplies.

Source: Mentioned in this RTV.

Can the Vulcan rearm missiles and torpedoes?

Can the Vulcan produce its own fuel?

No. The Vulcan will fill up from a provider of fuel instead of being able to produce its own.

Does the Vulcan have a tractor beam?

No. For search & rescue operations and salvage the Drake Cutlass might be a better alternative. Source

How profitable will the Aegis Vulcan be?

The Vulcan is expected to be excellent at making money in the ‘Verse. Since a lot of player activity will include travel and combat, the Vulcan’s ability to refuel ships and rearm / repair means that the Vulcan will be able to turn a quick profit helping players in distress. By buying parts and armament cheap and then reselling them at a premium during service stops, the Vulcan should be able to generate a reliable profit.

Who is the Vulcan best suited for?

The Vulcan is the ideal profession starting ship for players looking to expand into the Refueling, Rearming and Repairing professions.

What is the difference between the Crucible and the Vulcan?

The Anvil Crucible is a dedicated large repair ship and will be able to perform larger and more complete repairs than the Vulcan. The Crucible will be more expensive to dispatch, therefore the Vulcan is ideal to handle smaller repair situations.

The Vulcan is far more maneuverable and will outshine the Crucible at assisting ships in dense asteroid fields or other places that could pose a challenge to the Crucible due to its size.

What is the difference between the Starfarer and the Vulcan?

The Vulcan’s refueling capabilities are designed to get the damaged or empty ship to the nearest repair and refueling station. The Starfarer contains significant amounts of fuel required to keep fleets in deep space operations and therefore is capable of fully refueling all but the largest ships.

Are the Vulcan turrets manned?

No, they are remotely operated from the control stations used to control the drones.

Can the Vulcan be operated by a solo player?

Yes. It is possible for the Aegis Vulcan to be operated by 1 crew. A player can fly the ship, stop and control a drone station, perform repair activities and then retake the pilot seat. Source

Can the Vulcan restore a ship to 100% condition?

In Star Citizen there is no ship health status bar. The sum of the components on the ship and it’s parts is the general status of the ship. This means that the Vulcan can perform some types of repairs and not others. If, say, a wing is missing, then the Vulcan will not be able to carry out the repair. On the other hand, patching a hull or replacing a wing mount are within the Vulcan’s capabilities.