Considered to be the best dedicated exploration vessel by many, the Carrack is perhaps the largest ship capable of being used by a solo player. The Carrack is listed as having an operational crew between 4 and 6 which means that it is ideally suited for small teams of players to explore the far reaches of the galaxy and perhaps beyond.

Designed to be a home away from home, the Carrack offers all the facilities required to operate a space exploration ship. Many players also prefer to use it as a solo base of operations as it offers a little bit of almost everything while still being able to land on planets.

The Anvil Carrack has a ground vehicle bay as well as a small hangar. The ship is ideally matched with the Pisces snub ship and URSA rover.

The Carrack was first introduced as a concept sale on 24th November 2014. It is one of the most iconic ships in Star Citizen and certainly was the most anticipated.

The Carrack concept sale was released with a minigame - Into the Unknown: A Carrack & Her Crew. List of Star Citizen Minigames.

Ships with less dedicated cargo space than the Anvil Carrack:

Ships with more dedicated cargo space than the Anvil Carrack:

The Carrack features 3 modules which can be swapped out. In the default Carrack they are cargo modules. 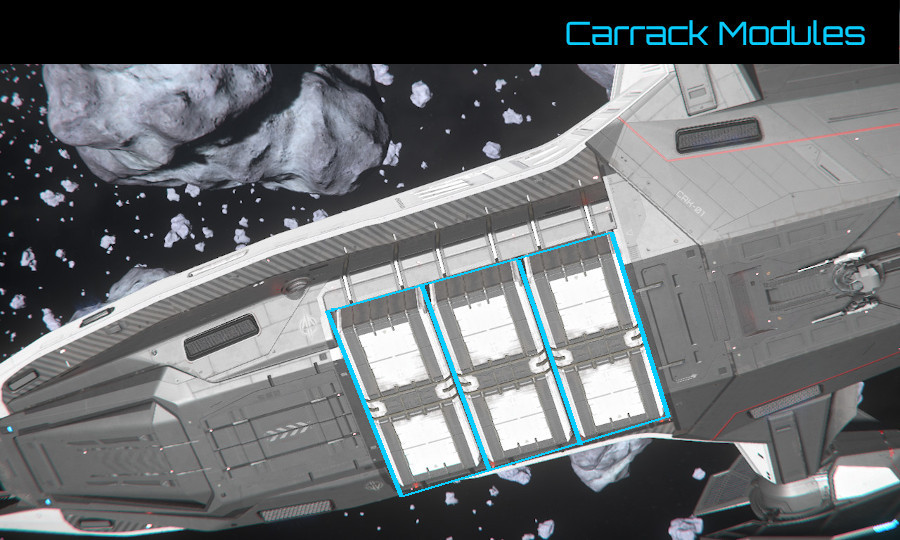 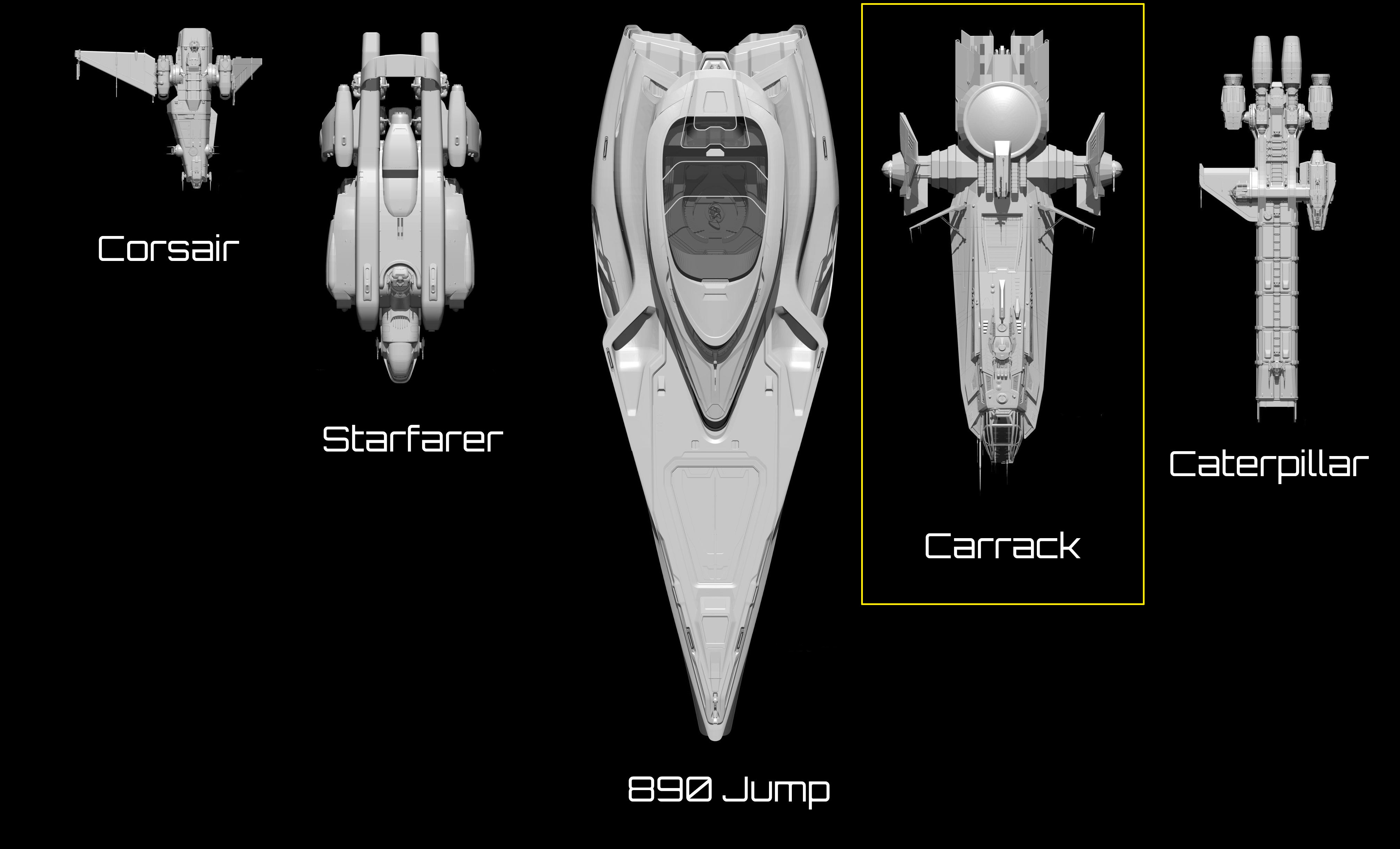 The Carrack is an attractive ship for solo players seeking the ultimate challenge in space exploration. While the ship is not meant to be played by solo players, many people consider this ship to be the largest "home away from home" that could be soloable for the most experienced of space captains.

The medbay can act as a respawn location and therefore as long as the player does not venture too far from the Carrack he/she should be able to spawn at the medbay upon death.

Players will eventually be able to hire NPC crew and this makes the Carrack a bit more appealing. A capable captain could lead an NPC crew across the galaxy in search of discoveries and treasure.

The Carrack is quite impractical for two players. While a solo player may be able to carefully enjoy his adventures, for two players the Carrack as an exploration ship will still feel too sparsely crewed.

The Carrack starts to really shine with more than a couple hands on deck. With two human players and some NPCs the Carrack makes for a spacious discovery ship.

Small groups of players (between 4 and 6 people) are probably the the ones that will benefit from crewing the Carrack the most.

For large groups of players the Carrack will seem to be a rather useless ship. While the ship can be somewhat seen as potentially being a carrier for a small ground force, the lack of significant defenses will mean a large escort would be needed for the Carrack to be supported during large ground assault operations. Large groups would be better suited to use other ships than the Carrack. The max crew really is about 6.

The Carrack's primary safety feature is that it will be exploring in deep space, far from the reach of pirates or other potential troublemakers. This means the Carrack is mostly vulnerable when it is leaving from port or returning from an exploration voyage.

However, it is worth noting that the Carrack is a retired military vessel meaning that it will still be quite tough (Anvil tough!) so fleeing from disadvantageous combat situations should not prove too difficult.

The Carrack is capable of dealing quite a bit of damage when fully manned, this means that it can be used as a raiding ship to attack small outposts or stations that are weakly defended. Players interested in raiding should also look at the Drake Corsair.

The Carrack features an extendable array of antennas.

The function of the antennae is something that still needs to be developed. 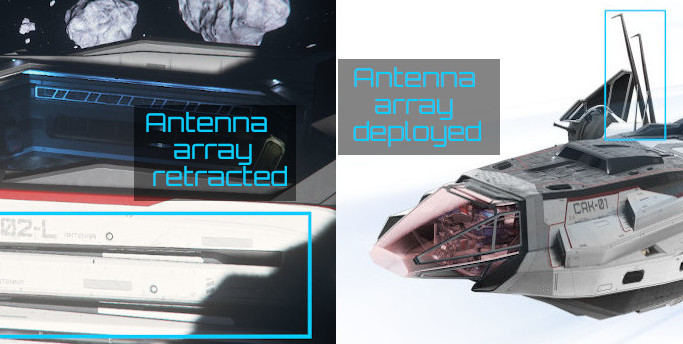 The Anvil Carrack features an extensive medical bay with decent capacity for its crew. This means that it can be also considered a medical ship. Again, the Carrack shines as one of the most versatile ships for its small crew and its large size.

The Carrack features both a ground vehicle hangar as well as a ship hangar.

The Carrack's ship hangar is purposely built to fit the Anvil Pisces C8 (or C8X variant). Other ships can also fit depending on their dimensions.

Ships that fit well in the Anvil Carrack hangar:

Source for this fitting guide: https://www.youtube.com/watch?v=jxCBAYML9fc

The Carrack has a vehicle hangar with a ramp accessible from the ground. Several vehicles can be stored in the vehicle bay of the Carrack but the Nova Tank is too tall to fit.

The Carrack is an incredibly versatile ship. Capable of running cargo, attending to medical emergency calls as well as it's intended role of discovery.

The ship is designed to be a home away from home, as a result it has all the capabilities for extended duration travel.

Is the Carrack really soloable?

Yes. The Carrack is soloable for extremely knowledgeable and skilled players who are capable of carrying out all the roles needed. For pilots who want to use it as a home away from home, the Carrack is as large as one can go without resorting to Origin ships.

Is the Carrack Worth The Price?

The Carrack is seen by many as the ultimate Star Citizen experience. It offers exploration as well as nearly a bit of everything else albeit for a price that has increased significantly since its announcement.

What does the Carrack Pledge come with?

The Carrack pledge comes with an Anvil Pisces and an URSA Rover.

Can the Carrack Vehicle Hangar Fit a Tumbril Nova Tank?

No. The Nova Tank is too tall for the Carrack's vehicle hangar.

How does the Carrack compare with the Drake Corsair?

The Carrack differs from the Corsair in that it is much larger and dedicated for deep space exploration. The Corsair is more of a glass cannon better suited for skirmish and attacking ouposts and space stations. True explorers at heart should go for the Carrack while the corsair is smaller and less self-sustainable.

Sources for this article