This is the 7th progress report about Star Citizen & Squadron 42 in the series since November 2018.

New In This Report

This report introduces a Suggestions section where SC FOCUS suggestions will be provided to give the developers some ideas should they read this report.

Information for this report comes from the SC FOCUS features completion page which has been updated again here: https://scfocus.org/star-citizen-s42-features-complete/

Completion for Star Citizen & Squardon 42 is scored based on a total of 104 features that were chosen to represent major gameplay milestones for both projects.

This represents an increase of 2% on the previous report from April 2020 which covered up to Alpha 3.9.

Again, no Star Citizen only features were updated for this progress report.

This indicates, with weight, that persistent universe work is delayed due to Squadron 42 work. While this is not new info, it does continue to highlight that players looking for PU gameplay improvements are going to keep getting disappointed probably beyond 2021. 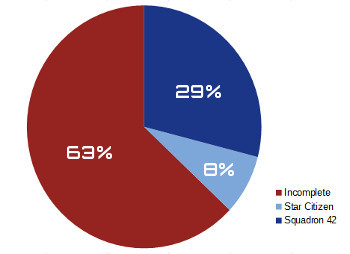 Since the previous report, two Squadron 42 features have become playable:

No features were changed to "Playable":

Alpha 3.10 brings total tracked feature completion for both games to 37%.

Browse the list of 104 Star Citizen & Squadron 42 Features for Tracking.

Alpha 3.10 brings very few major features since the last progress report. The biggest changes have been an overhaul of the Flight Model and revisions to some of the legacy systems such as ship HUDs.

Additionally, patches have been increasingly more delayed and content has been very thin.

Project Progress Velocity seems at the current time to be "Excruciatingly slow". This is further corroborated by the community sentiment.

Current S42 release date guesstimate: No Sooner Than Q2 of 2021 is likely.

Note: These dates are likely to be pushed back in the next progress report after Citizencon.

Alpha 3.10 seems like a side-step compared with previous patches where the new flight model seems to show that it will require quite a long time of testing to perfect. Overall playability score for Star Citizen remains unchanged at 3/5.

Playable but with stuttering and crashes. In the previous report it was mentioned that crashes were less frequent but during the previous months the stability has deteriorated significantly. Stability leaves much to be desired and playing can be a frustrating experience if trying to increase credits.

Game and server crashes can lead  to lost progress.

The game is still very much for testers. People looking to play can have limited fun but the experience can be very frustrating.

Player counts are still 50 players per server. Far from anything that can be considered an MMO. This shows the infancy of the Alpha still.

This is probably the area of the project with the least progress.

The economy feels faked. Alpha 3.10 brought player to player money transferring but also some updates that seem to have made earning in game credits (aUEC) harder.

It is possible to make some progress and during 3.9 some players were able to accumulate 100s of millions of aUEC. Without cargo transferring, refining, ship selling, unique items and more the economy still feels like a test-bed shell.

Read more about the Star Citizen in game economy.

Alpha 3.10 brings with it a new flight model as well as signed distance fields and changes to atmospheric flight.

In the last report it was mentioned in this category that the flight model was in the final phase of polish, however, the latest iteration of the flight model seems like a side-step more than polishing. The new model itself will again require many months of tweaking which still might not be enough to finish it. More on this in the "suggestions" section below.

Dogfighting in Alpha 3.10 has changed significantly with the introduction of the new flight model. The new dogfighting seems slow, clunky and less about flight skill and more about ship and component knowledge. There is also new targeting methodology which seems like a step in the right direction.

Pips seem more accurate and there seems to be less jitter. Desync is still bad enough to ruin much of the combat experience.

FPS combat has not changed with Alpha 3.10. Character models still warp and suffer from desync and hitbox issues.

AI is the the only category in this section that is changing score (from 2 to 3). AI is working slightly better for both ships and fps. For a score of 4 it will need to be much more capable of complex behavior as well as better response time. For a score of 5 it will require AI crew as well as AI navigating the universe freely.

This section offers some suggestions for CIG during the development of Star Citizen Alpha. These suggestions could be useless and might be completely out of touch with what is being worked on. They are a collection of ideas regarding the current state of Star Citizen Alpha that could help with the development or hinder it. They are provided as rough ideas that the author of this article would like to see tried.

Given the current lack of community enthusiasm and engagement about the flight model this article will make a suggestion for CIG.

Rather than try to provide the community with a "finished" flight model it might be a good idea to try a fully realistic model first and then fine-tune it with the help of the community.

The Star Citizen engine is already capable of providing realism and CIG have a very strong community. The idea for this suggestion would be to:

Many players will always wonder what Star Citizen with realistic physics would have been. Star Citizen Alpha seems like the perfect time to let the community at least try this for a few months.

This could help solve the issue of trying to release a final flight model only to later discover some of the fundamentals cannot be tweaked / fixed without a complete overhaul. Trying the realism-first approach could be a better approach.

Star Citizen suffers from a lot of griefers and trolls, many of which prefer to destroy ships outside of Port Olisar rather than carry out legit piracy - because it doesn't exist in game yet.

Even though there are severe limitations with adding to the Star Citizen universe without additional backed technology, it should be very simple with the current technology to add player territories and factions. All the game would need is a few of these "open pvp high resource" areas that would reduce griefing and provide for much more fun than what is currently available.

While this seems like an overlap with the upcoming Theaters of War it would be quite a different (and simpler) experience..

This would make fighting over territory a thing during Alpha.

The same example above could be done with an area in space, say in an asteroid field, like a very small pvp grim-hex which would just have very basic installations on an asteroid.

Give players the option to spawn in a permanent player hangar located in an asteroid field. The hangar could be used as a base of operations and players could no doubt find other emergent gameplay. This would have the double bonus of allowing players to test the advanced hangar functionality without clogging cities and densely populated areas. While the technology for this does not seem ready yet, this could be an intermediate goal to have.

The game is still very much in an early alpha state of testing at approximately 37% complete. The game is not recommended for new players as it is highly unstable and still missing roughly two thirds of the actual game.

Enough quality of life features are in the game to make it feel playable at some level for short playtesting sessions.

In the last report we said "Actual gameplay mechanic implementation continues to be very slow or nearly stagnant." and this trend seems to continue.

Alpha 3.10 brings very little gameplay and more gameplay delays were announced including further delays to Salvage. Salvage was originally scheduled for Alpha 3.2 back in November 2018 and based on what can be observed on the Roadmap now, it seems that even 2021 might not bring salvage as the stepping stones for this gameplay profession are not even on the horizon (cutting, scrapping, etc...).

Star Citizen, which relies on the completion of S42 to see additional gameplay progress, will definitely have the release date estimate pushed back to at least 2023 but probably 2024 or further in a future progress report. Release date estimates are not being changed after this report but the incentives to push them back are growing. Look out for a possible update to the release dates after Citizencon when a better idea of progress can be gauged.

Information on this site costs money to produce and maintain. It is currently available openly at no cost but this is probably going to change. As hosting costs continue to go up and popularity for this website grows, it is close to a point where it is becoming too expensive to run this website. Begging for donations and filling the site with ads is something that goes against the founding principles of the website. As such stay tuned for alternatives in regards to the content of this website.

It is possible that some new intel will be released behind a paywall and eventually, perhaps months later, appear on the free section of the site. If you want to keep this project alive you can send non-advertising suggestions to INFO [AT] SCFOCUS.ORG (all lowercase)

The list of 104 features used to track "progress" in this report are listed at the Star Citizen Completion Features Percentage Page. This is a highly simplified list of features out of thousands of technical, art and gameplay features that the game(s) will end up having. 104 features were chosen as a simplified average set of gameplay features that the author guesses are plausibly required in the final games to be considered "complete".

The data is gathered as objectively as possible and is non-promotional in nature. This information is purely speculative based on personal criteria. Opinion can and should vary. It is provided for free and actually costs time and money to maintain.

As always, this article does not represent the official views of Star Citizen. It is provided as speculation to help SC FOCUS org plan the strategy going forward. This information is provided to readers openly and freely and each reader is free to form their own opinion.