Who is this guide for?

This guide is intended for players who need help starting out with testing Star Citizen Alpha 3.7. Returning players from older builds may also find some of this content useful. This article services to provide a general overview of Alpha 3.7.

The above link will take you to the the article about the Free Flight Anniversary Expo 2949 (2019).

The New Launcher Version 1.3.0 is required for Star Citizen PTU and Live.

To check if your launcher is the latest version (v.1.3.0) open the Star Citizen Launcher and check the version in the bottom right.

Steps to upgrading to the new launcher (for a fresh install go straight to step 2):

While Roberts Space Industries official website offers tutorials, what is presented for new players is not comprehensive enough and players should always take time to practice in the simulator before entering the Persistent Universe.

View the Official How To Fly guide from RSI.

Keys to learning to fly:

Landing on landing pads and in hangars requires that pilots first request landing permission. This can be done via the ship's MFD panels (Hold F and click to interact) or by opening the contacts list in MobiGlas (F11).

If you have a crime stat landing permission will be denied at many locations in Stanton. Landing without requesting permission on a pad or hangar will incur fines and possibly a crime rating.

Star Citizen Alpha 3.7 offers significant amounts of gameplay while still only being a tiny fraction of what is eventually planned for Star Citizen. While the final vision describes hundreds of star systems to explore the current Alpha takes place in the Stanton System only. Even so, this offers testers with more gameplay than many released games, not to mention one of the biggest seamless play areas of any game.

Despite the bugs caused by the game still being under construction, many hours of entertainment can be had. The amount of things to do in game is too long for a full list for the purpose of this article but here are some of the options. Even though credits are reset periodically during Star Citizen Alpha, it can still be fun to see how much can be accumulated before each reset.

There are already about 100 flyable ships and usable vehicles out of so far 150 announced (source: reddit) that are publicly known at this time.

For more a more in depth look at the Star Citizen Economy please read this article -> https://scfocus.org/star-citizen-economy/.

There are several ways that players can earn in game credits (aUEC) while play testing Star Citizen Alpha. One player even being able to go from an Aurora starter ship all the way to purchasing in game a Anvil Arrow relatively swiftly (Reddit link).

Since Star Citizen is a sandbox game it is possibly to earn your way without using any of the scripted on-rails missions.

Let's look at some of the ways to make money in Star Citizen Alpha 3.7:

The most profitable missions for beginners are cargo delivery or combat assistance. This is where choosing the Starter Ship that is best for you is important. Ships like the Mustang Alpha or the Aurora MR are good for cargo delivery, ships like the Arrow is geared for combat.

Alpha 3.6 brought with it the Law System and each area of space has different legal rules players must comply with or risk the consequences.

*About Levksi: Levski is supposed to be located in the Nyx system which is several jumps away from Stanton system. As of Alpha 3.7 Levski (Delamar) is still temporarily in Stanton system for testing.

Noncompliance with the different laws can have ranging consequences from small fines deducted automatically from your in-game aUEC balance to severe crime rating increases.

Having any crime rating can seriously affect which areas of the game you have access to. For example, even a level 1 crime rating will revoke landing permission at UEE ports in Stanton system.

Players can receive crime ratings for things like shooting players without the appropriate bounty contracts or hostile tag, ramming other ships on pads, parking illegally on landing pads (can happen if landing without requesting permission first).

Players can also be interdicted by security patrols while traveling. This means that if illicit cargo is found on board crime stat will also be issued.

In Game Journal With Jurisdiction Info (In Game). This can be accedes via the MobiGlas and going to the "Journal" option. 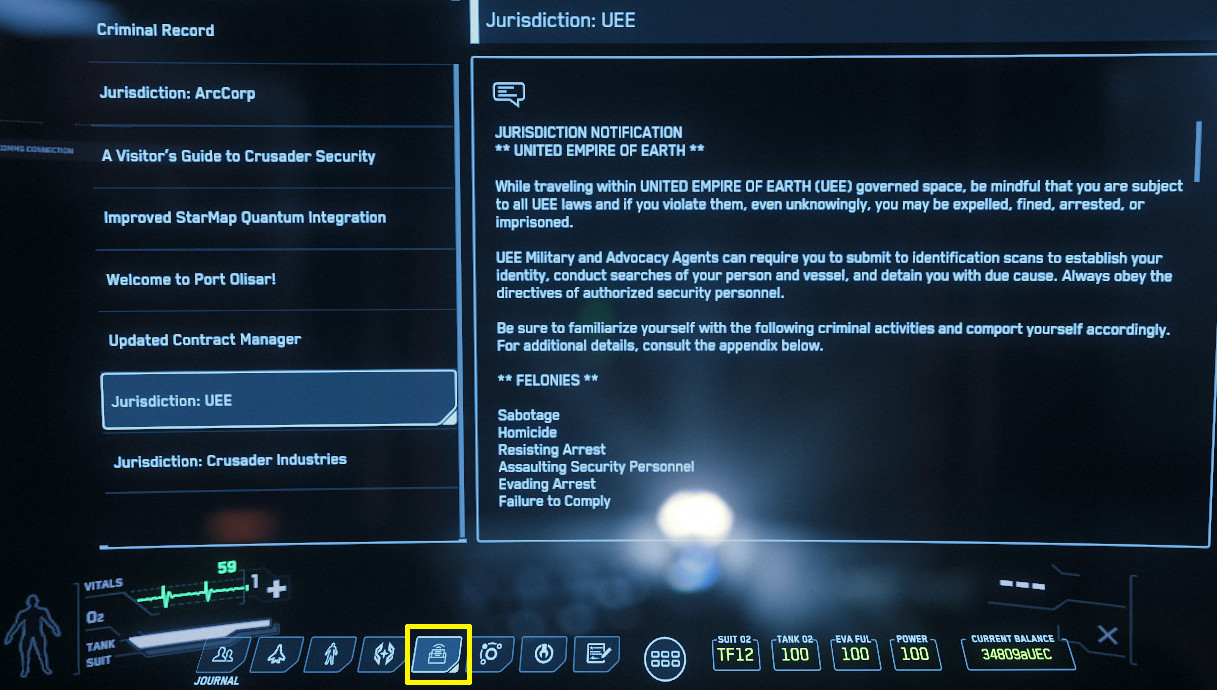 Gaining a crime rating can happen very easily for new players. Since a criminal rating even as low as 1 can influence what pads players can land on and the availability of missions it is extremely important for new players to know how to clear their rating.

The following methods can be used in Alpha 3.7 to reset your rating:

Clearing Crime Stat by being shot by Crusader Security

Perhaps the easiest option to reset the crime rating in Alpha 3.7 is to simply land at Lorville and then allow the Crusader Security guards to kill you. Crusader Security enforce he law very severely and will shoot even level 1 players on sight.

Since you cannot request landing permission at Lorville if you have any Crime Stat rating, the easy option is to land near one of the external gates and walking into the city. No fly zones prevent players from landing too close to the gates. Once near or in the city Crusader Security will enforce the law by shooting the player to death.This will reset crime stat rating.

Another option to clear Crime Stat is to either purchase or find a Crypto Key and then proceed to one of the UEE terminals that can be hacked. Currently there are at least two such terminals. One is located at Security Post Kareah and the other is located in a bunker on Hurston. Both of these locations are inhabited by NPCs who will shoot on sight.

Crypto Keys can be purchased at the following locations:

A free Crypto Key can also be found by accepting one of the mercenary missions. In the mission description instructions can be found how to acquire the Crypto Key for free.

Once you have a Crypto Key the next step is to go to one of the two known Security Terminals:

In Alpha 3.6 the Black Market economy was enhanced and in 3.7 continues to be refined. One of the sandbox ways of making money is to run cargo of illicit goods. Illicit goods can be found at many outposts. Websites to find ideal cargo routes can be found on the Star Citizen Resources page.

Players can take missions to the secret drug labs but after the missions have been completed the drug lab locations will no longer be available. As such it is important for players to find alternative methods of "remembering" how to reach these locations.

Black Market Economy is recommended for advanced players and not for beginners.

Logging Out And Persistance

Star Citizen automatically stores the player's spawn point when landing at major space ports. The last visited major landing port will be where the player respawns when resuming from a previous play session.

It is also possible to use ship beds as spawn points. Logging out in a ship's bed will allow players to continue where they left off for the next play session.

Between sessions not everything persists as of Alpha 3.7.1. Things that do not persist: